It’s a good joke among my friend that I don’t follow sports. My better known friends know that I’m actually pretty fluent in late 90s and early 00s sports. However, growing up outside Boston in that era, New England sports were not the dominating dynasties they are today. The Red Sox were usually good, but never as good as the Yankees, the Patriots made it to one Super Bowl and lost…

And the Celtics were TERRIBLE. While there wasn’t much to look up to in the Rick Patino-era Celtics, there was the legend of the 80s Celtics under Larry Bird.

While “Larry Legend” is notoriously un-athletic to this day

he’s still on a lot of people’s list of greatest players. And I think there’s a few abstractions about his playing style that will make you a better musician regardless of what instrument you play or what styles you play in.

and opportunities will be created for you

platform is his ability to create opportunities for everyone else wearing green and white. The key to that for Larry is a lot of court awareness and a little creativity. As a musician that means you’ll want to have the biggest ears you can. If you watched the clip above the voiceover says the he would make a concerted effort to keep everyone involved in the offense. Especially in this day and age of play along tracks, you or someone you love on the bandstand may be treating the “back line” as a backing track.

While music is going to be hierarchical to some extent, just because it’s “your time to shine” doesn’t mean it’s time to give some love to the others on stage. In fact, once you’re comfortable with it you’ll probably find that you shine brighter for the synergy you’ve created.

As a jazz bassist, our solos are often last and least appreciated. One of the best ways to liven it up is to engage the dummer in a freeform dialogue—if s/he is receptive to the space you are leaving (pro tip: making eye contact is a great way to let people know what you’re trying to do. Imagine Larry Bird’s no- look passes if his Parrish and Ainge were looking somewhere else). This dovetails with active listening which is a post for another day. (if this text is linked there’s a post on the subject). If you’re working with quality musicians, you’ll notice them engaging you back. Like in love, however, some people are strictly takers and won’t return your musical affections. Fear not, someone will notice your exquisite sensitivity and you’ll slowly meet the musicians all your friends are telling you that you deserve. That’s how Larry Bird make all those passes and still ended up near the top of the all-time scoring leaders.

Really listen to a lot of records, being able to sing everyones part to a song is a good sign you have internalized what everyone is doing. Even if you’re a garbage singer like me, if you can accurately sing the rhythm and at least approximate the pitch everything going on in even 8 measures of a song the represents what ever style you’re working on, you’ll be much more receptive to everyone out on the band stand, and anticipate what people are doing and can help set them up. This isn’t a small endeavor, spend a little time on it every day for a month or so.

2: Find the Subtlest Way to be Fancy

This compilation of Larry Bird highlights attests to his deadly sense understatement. He didn’t need speed or vertical leap to

fake someone. He tends to use the minimum action to get the opposing players to commit to the fake. In music terms, this is similar to how our ego wants us to be able to play “Countdown” in 15/16 while super imposing some-yet-unheard substitutions over the top. While if you can pull that off please do and send me video so I can watch 30 seconds before clicking on something else, you can get the same “ankle breaking” effect with a perfectly placed blues lick.

Developing the taste that breaks ankles takes a lot dedication, but probably dedication less than learning everything in odd time signatures. Plus, if another can play the aforementioned “Countdown” exercise if a way that you’d watch it for 5 minutes, it’s probably because they can still get their “tasty licks” in despite the other challenges.

Keep an ear out for all things tasty and work on everything you’re working on for longer so you can pull it off with more conviction. Having more access to pre-transcribed music has not made our playing more convincing or tastier. Again, take it form a terrible singer like me, being able to sing everything from the drum part to the front line is ultimate test of what’s really “inside” you.

(pro note: Remember this basketball analogy doesn’t really extend to mean our teammates are our bandmates and the opposing team is the audience. The most obvious example is when you are playing for people who are there to dance in a venue designed around dancing. James Brown’s drummers always had fantastic deconstructed drum beats that put kick and snare accents in unexpected places, but your booty always knows ‘one’ is. So when people are dancing you can get away with a lot of harmonic ‘slick tricks’ but if what you’re doing relies on rhythmic sleight of hand, make sure those booties are moving. If not, save it for a performance where your audience is sitting in chairs that all face the stage.)

So despite not being athletic, Larry Bird was one of the best people at shooting basketballs through hoops in the history of people have that as a life goal. He has one of the highest career free throw percentages all time, won the three point contest three times, and had a noted ability to make the highest pressure shots. In basketball, the goal is to get the ball through the basket. Everything else is a means to get the ball into a basket. Vince Carter jumping extra high is only helpful to the extent it helps him get the ball through the basket. He doesn’t get extra point for sticking his whole arm in the basket. What’s the equivalent of a jump shot in your musical path. In jazz, it’s probably fluency with ii-V progressions. Whatever music you play it definitely involves having impeccable time and great intonation.

Practice everything very slowly with a metronome. When you’re comfortable enough to speed the metronome up, probably try keeping it slow and doing something more difficult with the metronome. Getting better at something probably involves more deconstructing than you think. If I’m trying to clean something up I can already play but not up to my standard I’ve found a fairly longwinded but very effective method for getting it there. Start at performance tempo, and slow it down until the thing that’s dragging starts rushing (even when something is rushing, it’s usually because something subtle drags and I’m the compensating). Then go a little slower, iron out the problem, then SLOWLY work it up to performance tempo again. Lauren Pierce shows us how to speed it back up, and her lyricism and precision attest to the effectiveness of such diligence.

This one is probably less unique to Larry, but as musicians of any level our goal is to stir feelings in other people. One side of that coin in the technical proficiency from “Be Very Good At Your Job,” the other side of that coin is having that internal fire so that there’s something to convey. It’s easier to know when you hear it, than explain it. So, we’re jumping into How To Work On That a little early.

Reflect on why you play music. Remember what the most transcendent moments you’ve had both as performer and a listener. Don’t try to replicate those moments, just remember them. One thing you can work on while you are playing is deciding what you want to convey about a song or tune before you start playing. Choose the obvious choices first, play “Them There Eyes” trying to convey all the thrills of a new crush. As you get more proficient you can paint subtler subtext. How would you perform that song differently with the subtext that if you and the subject are both in relationships already. If you’ve ever done acting this probably sound pretty familiar. Instrumental pieces are harder to pin down. But classical musicians do it all the time, and what do classical musicians have on the rest of us?

I also remember an interview where prog rock bassist Billy Sheehan talks about the way to figure out how to be a rockstar is to listen to the rockstars of the music you don’t listen to or like. He specifically mentions Sinatra At The Sands which would be a surprising choice to an audience who’s listening to hear how to be Steve Vai’s next bassist. Who were/are the “rockstars” of Opera, Rap, British Skiffle, or

Frank Sinatra was no slouch of a singer but he was far from the greatest singer on the scene at the time, yet he’s the icon and we all love him. There’s not going to one defining sentence that explains “rock star” but if you can start to notice a thread that connects all of them you’ll be a lot closer to figuring it out than if you didn’t try.

Yes! Larry Bird is an uplifting example of how we can be the best musician we can be. Especially if we consider how we relate to the other musicians we are playing with as well as the audience. While a lot of basketball players a decent amount of their success boils down to “grow up to be very tall and remarkably athletic” in addition to working hard basketball. Those of us who don’t have videos of us playing unreasonably fast lines at the age of 6 that have 4 million views can still take our average natural abilities and work smarter in addition to harder and still be in the talks of who’s the greatest.

1: Be aware of everything around you so you create unexpected opportunities for your band mates. In fact, cultivate this skill with deep listening and singing along to all parts of records at home.

2: Being subtle will often go further than the alternative. Mingus said “My son's a painter. All through school his teachers tell him he's a genius. I tell him to paint me an apple that looks like and apple before he paints me one that doesn't. Go where you can go, but start from someplace recognizable. Making the simple complicated is commonplace; making the complicated simple, awesomely simple, that's creativity.” You’ll figure out the stuff your ego wants to eventually.

3: Whatever the fundamental technical role you play in the music you are performing, be able to consistently execute it at a level as high as your heroes. Whatever instrument you play in whatever style, I guarantee that involves having outstanding time. So if you haven’t practiced with a metronome today, pick it up and work through some simple rhythmic exercises.

4: The fundamentals are what allow you to communicate. Having an internal passion and sense of yourself if what gives your music content to be communicated. You have to have both, so work on both!

What sports stars you see yourself as on the bandstand? Let me know in the comments! 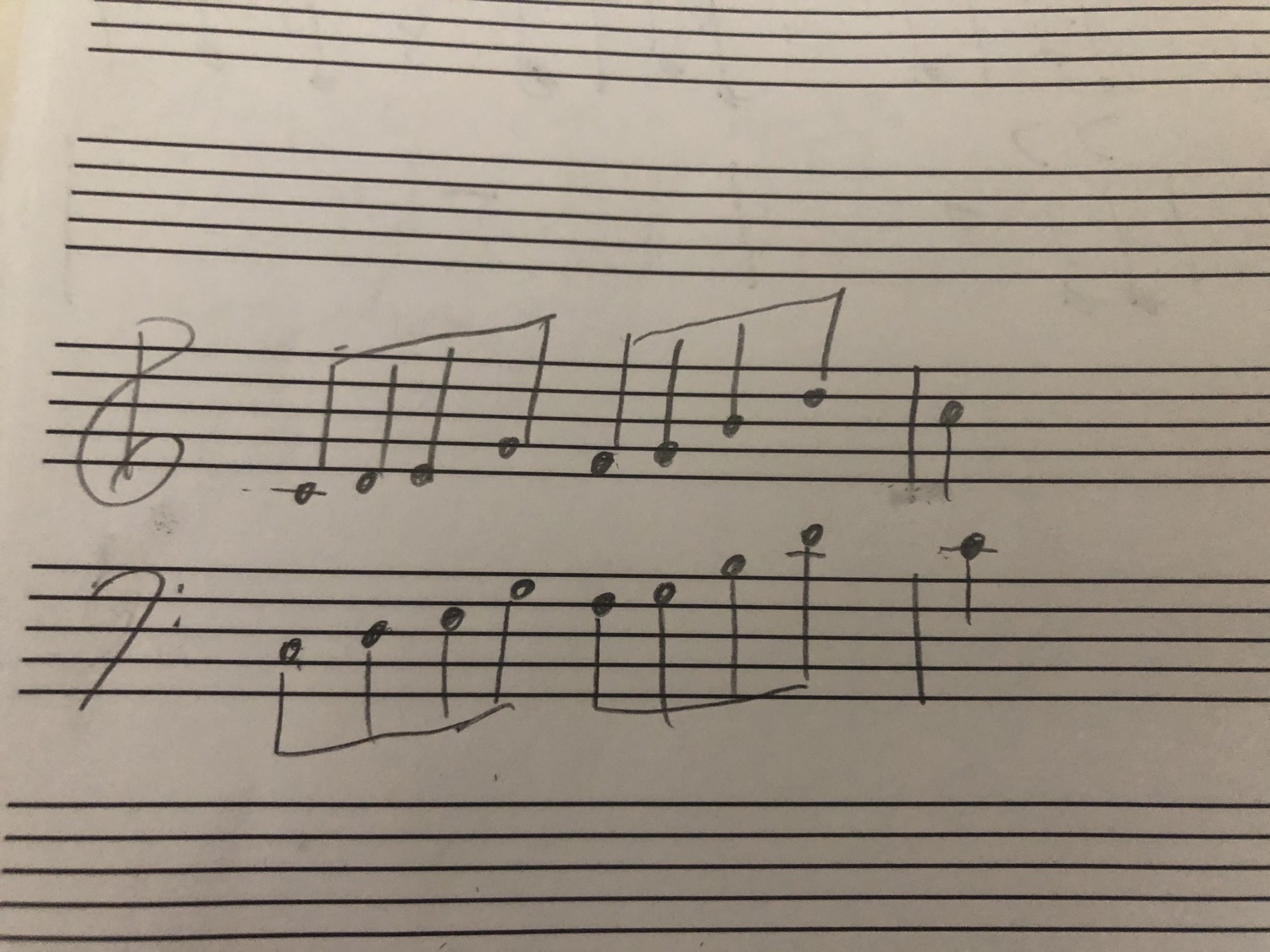